Nuclear power has a big role to play in the energy transition. Here's why


Our planet needs a new energy system able to sustainably provide a reliable and incessant supply of electricity. Nuclear is among the energy technologies available today with the lowest GHG emissions, producing only 15 grams CO2-equivalent per kWh, when considered over a plant's entire lifecycle.

According to the International Energy Authority (IEA), between 1970-2013 the use of low-carbon energy sources meant we avoided 163 Gt of CO2 emissions. Nuclear power contributed 41%, while solar and wind accounted for 6%. Nuclear energy represents one of the lowest sources of GHG in the combined lifecycle of power-generating technologies, as shown in many independent analyses.

Without nuclear energy, CO2 emissions from energy generation would be a lot worse
Image: IAEA

Nuclear plants today provide 10% of the world's electricity, all of it carbon-free – that's almost twice the combined contribution of solar and wind. To meet the key energy goals of the United Nations Sustainable Development Goals (SDG), the Paris Agreement has set a specific ambition for nuclear, targeting the doubling of present installed capacity by 2050. For the nuclear industry the challenge is double; it is about progressively replacing plants reaching the end of their lives, and adding new plants to the existing fleet. However, there is need for innovation.

Challenges and cost of the energy mix

Decarbonization requires a realistic proposal to substitute, by 2050, the 81% share of energy produced today from fossil fuels. Picking the right energy portfolio mix is a difficult matter, and technologies that not yet mature enough to make an impact before 2050, such as fusion power or carbon capture and storage, should not be relied upon. The low-carbon technologies that are currently adoptable are wind, solar, hydroelectric and nuclear. Excluding, limiting or restricting any of these technologies undermines the cost mitigation and delays the reduction of emissions. But the possibilities for growth are singularly limited.

The technical advances of solar and wind cannot overcome their intermittency, nor the physical laws that impose limits to their efficiencies. Mitigating the intermittence of wind and solar with energy storage systems is improbable; only small amounts of cost-efficient electricity storage will presumably be available at reasonable cost in near future. The most promising batteries are based on metals such as lithum, cobalt and magnesium that require energy-intensive energetic mining and whose reserves cannot fulfil theoretical global demand.

The contribution nuclear power can make to the energy transition lies in its ability to follow and assume the system costs generated by the intermittency of renewables. Ensuring a permanent balance between demand and supply, the nuclear baseload can offer “load tracking”, adapting swiftly to seasonal, daily, and hourly variations in demand. These requirements become increasingly important, the higher the penetration of renewables into the market.

Nuclear sceptics point to its cost: there are many examples of cost and time overruns in nuclear plants, and it's true that the costs for wind and solar are ever-decreasing. But when all factors are considered and the level of market penetration of a particular technology is measured, a cost analysis presents contrasting figures. Power plants do not exist in isolation; they interact with each other and their customers through the grid and within the surrounding economic, social and natural environment. That is why the assessment of total costs should include not only the capital costs, but also the costs for grid connection, extension and reinforcement, the technical and financial costs of intermittency, the cost of security of supply and its impacts, and the local and global environmental impacts.

An analysis has been carried out in different countries to quantify these costs in respect to the penetration level of renewables in an energy mix, including nuclear, solar and wind. Introducing variable renewables up to 10% of the total electricity supply will increase the cost per MWh by between 5% and 50%, depending on the country, whereas satisfying 30% of demand could increase costs by anything between 16% and 180%. Country-by-country differences are more important than technology-by-technology differences. A comparison between two different markets – the UK and US – is shown below: 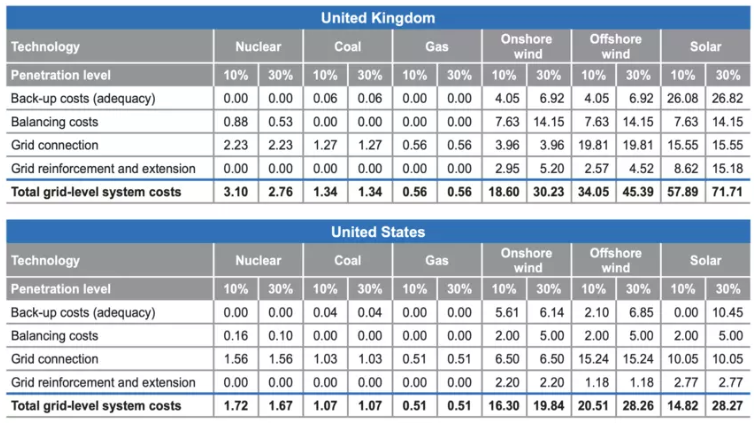 Grid-level system costs in the UK and US (dollars per MWh)
Image: OECD, NEA

The increases in electricity costs linked with an increasing share of renewables results from a combination of higher investment costs, balancing and adequacy costs, and additional expenses for transmission and distribution. Balancing costs are those necessary to guarantee the system performance on a minute-by-minute basis of demand and supply, in the presence of uncertainty in demand and supply. Adequacy costs are incurred in satisfying demand at all times, taking fluctuations in demand and supply into account. These are the costs required to supply hospitals with electricity in the midst of a pandemic – even on cloudy or windless days.

Today, in countries where dispatchable technologies are present, these costs are zero; but introducing renewables while retiring old dispatchable capacity and adding new dispatchable capacity to produce when variable renewables are not available, makes for substantial adequacy costs. The integration of significant amounts of variable renewables is a complex issue that affects the structure, financing and operational mode of electricity systems. In most OECD countries, wind and solar power receive fixed tariffs for every MWh fed into the electricity system regardless of market prices. Such asymmetric treatment isolates variable renewables from the impacts they inflict on the market price. This is not to undermine renewables, but to highlight the fact that in the absence of a nuclear contribution, the energy transition will be slower, costly, and at risk of failure. Making these system costs transparent is meaningful to investors, customers and decision-makers.
What's the World Economic Forum doing about the transition to clean energy?

Moving to clean energy is key to combating climate change, yet in the past five years, the energy transition has stagnated.

Energy consumption and production contribute to two-thirds of global emissions, and 81% of the global energy system is still based on fossil fuels, the same percentage as 30 years ago. Plus, improvements in the energy intensity of the global economy (the amount of energy used per unit of economic activity) are slowing. In 2018 energy intensity improved by 1.2%, the slowest rate since 2010.

Benchmarking progress is essential to a successful transition. The World Economic Forum’s Energy Transition Index, which ranks 115 economies on how well they balance energy security and access with environmental sustainability and affordability, shows that the biggest challenge facing energy transition is the lack of readiness among the world’s largest emitters, including US, China, India and Russia. The 10 countries that score the highest in terms of readiness account for only 2.6% of global annual emissions. 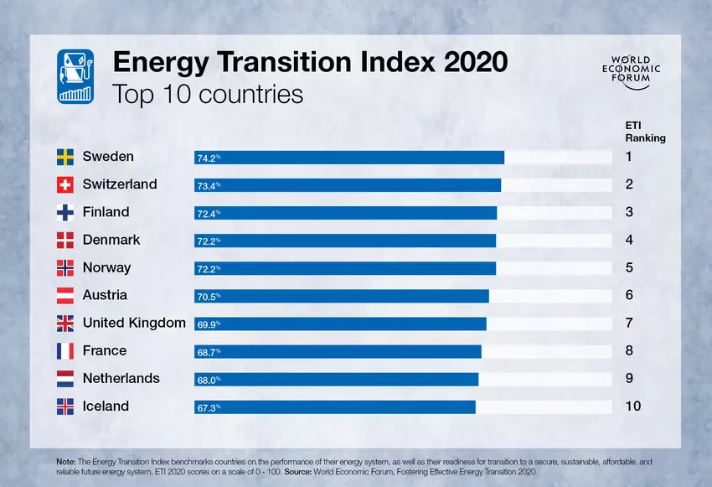 To future-proof the global energy system, the Forum’s Shaping the Future of Energy and Materials Platform is working on initiatives including, Systemic Efficiency, Innovation and Clean Energy and the Global Battery Alliance to encourage and enable innovative energy investments, technologies and solutions.

Is your organisation interested in working with the World Economic Forum? Find out more here.


The future of nuclear

Many countries have committed to increase the share of power from nuclear energy in order to meet the Paris Agreement targets. But the political and economic environment, and the public lack of support, make the prospect of accomplish these ambitious objectives extremely difficult. As detailed above, the cost of nuclear – once all parameters are included – is not barrier. But waste, safety and nuclear proliferation are still roadblocks that should be tackled in order to enable deployment of this technology.

Today, some enterprises are proposing a new technological approach, built on a different type of fission energy production based on the coupling of particle accelerators and subcritical reactors. This technology – termed the 'accelerator driven system, pioneered in CERN in the 1990s – aims to reduce the lifetime of existing radiotoxic nuclear waste and to produce carbon-free energy at an affordable price of less than 5 cents per kWh. This technology is safer, scalable, sustainable and resistant to proliferation. The key innovation is the use of a proton accelerator to generate a high-intensity neutron source which induces fission reactions in the core. Yet as soon as the accelerator stops, the fission reaction also stops. The sub-criticality of the core implies an intrinsic safety; runaway accidents of the Chernobyl type are impossible. As the system proposed is equipped with passive heat removal, a meltdown accident of the Fukushima or Three-Mile Island types would also be impossible. The reduced waste produced from such a plant will have shorter lifetimes (around 500 years vs. 300,000 years) because the reaction uses thorium-based rather than uranium-based fuel. The system also provides the possibility of using present nuclear waste as fuel, therefore reducing the amount and radioactive profile of today's large waste inventory. With thorium fuel, plutonium production is negligible, eliminating the most common element for nuclear bombs. The IAEA states that the thorium fuel cycle would be “intrinsically proliferation-resistant”.